The case for a treaty on marine plastic pollution

The call for a new international treaty on marine plastic pollution is growing in strength. Scholars and civil society actors are now calling for a global regulatory framework to be put in place. At the first session of the open-ended ad hoc expert group on marine plastic litter and microplastics, held on 29–31 May 2018 in Nairobi, Kenya, an increasing number of States clearly articulated the need for such a treaty. 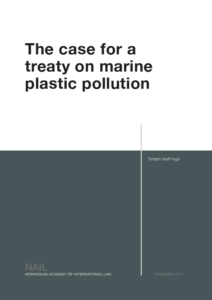 Proponents of a new legally binding instrument argue that a treaty would establish an important global meeting place for dedicated discussions about marine plastic pollution, and that it could help stem the tide of harmful plastic production and pollution, improve coordination, facilitate resource mobilization, and build synergies between existing initiatives and regimes. It has also been pointed out that a new treaty could help ensure continuity, harmonize monitoring and reporting, and that it could serve as an important tool for national policymaking.

These arguments have not yet convinced everyone. Some States have questioned whether a new treaty has merit at this point in time, and whether it might instead be more effective to channel the energy and resources of the international community into strengthening existing initiatives, instruments and structures. It has been pointed out that a new treaty could take a long time to put in place and even longer before it is implemented. Given the urgency of the problem, this has led some to conclude that more immediate and tangible measures should be prioritized.

The purpose of this policy paper is to contribute to the ongoing debate about the merits of a new treaty by exploring and expanding, in a structured manner, some of the arguments that have been made in favour of the new treaty. The paper starts with a description of the problem, followed by an assessment of its root causes and why it has not already been solved. Section 4 outlines a set of possible elements for a new treaty, while the final section provides a brief discussion about feasibility and the way forward.